Home / Blog / What Is Duty to Retreat and How Does It Work?

What Is Duty to Retreat and How Does It Work? “Duty to retreat” is a phrase you’ll hear from time to time when discussing lawful self-defense. It's a term that is frequently misunderstood and misrepresented, so call your Independent Program Attorney if you have any questions. Let's unpack this legal term so that you can understand what it really means when a state has a duty to retreat law.

What Does Duty to Retreat Mean?

As a concept, duty to retreat generally refers to when a jurisdiction requires a person to retreat when they can do so safely before harming another individual (or using certain levels of force to defend themselves) in an act of self-defense. Conversely, some states have a “stand your ground” law, which usually is the absence of a duty to retreat law that generally means that the jurisdiction likely does not require a person to safely retreat before attempting to use force or deadly force to protect themselves after a person unlawfully attacks them. Although there isn’t a duty to retreat case that applies in every jurisdiction, the significance of these laws can be seen by way of a hypothetical example.

For instance, if a person is in a state where there is a duty to retreat and an attacker takes out a firearm, aims it, and says “have any last words,” but the victim knows that they could run inside their home to a saferoom and escape, the victim may be required to do so. Conversely, if the same person is in the same situation in a stand your ground jurisdiction, or a jurisdiction without a duty to retreat law, the person would likely be able to defend themselves using deadly force without first retreating.

Generally, states that have a duty to retreat are the opposite of states with a stand your ground law. Several states have laws that specifically establish that there is no duty to retreat. Other states, such as Colorado, have case law precedent that effectively makes the jurisdiction a stand your ground state. In such states, law-abiding people are generally not required to try to safely retreat before using lawful force in self-defense.

What States Have Duty to Retreat Laws?

Some states impose a duty to retreat when a person can do so safely. For example, in Massachusetts, "A person must generally use all proper means of escape before resorting to physical combat." Commonwealth v. Niemic, 696 N.E.2d 117 (1998). Other states have a duty to retreat written into state law, like Nebraska. Nebraska’s law indicates that use of deadly force is not justifiable unless the actor believes that such force is necessary to protect himself against death, serious bodily harm, kidnapping, or sexual intercourse compelled by force or threat. It is also not justifiable if the actor knows that he can avoid the necessity of using such force with complete safety by retreating. Nebraska law goes on to state that there is no duty to retreat in your own home. States with similar laws to Nebraska include Connecticut, Delaware, Hawaii, Maine, Minnesota, New Jersey, New York, and Rhode Island .

What About Washington, D.C.?

Washington, D.C. favors a middle ground approach, where there is no statutory duty to retreat, but the Criminal Jury instructions for the District of Columbia 9.503  states that:

The law does not require a person to retreat or consider retreating when s/he actually and reasonably believes that s/he is in danger of death or serious bodily harm and that deadly force is necessary to repel that danger. But the law does say that a person should take reasonable steps, such as stepping back or walking away, to avoid the necessity of taking a human life, so long as those steps are consistent with the person’s own safety. In deciding whether [name of defendant] acted reasonably, you should therefore consider whether s/he could have taken those steps, consistent with his/her own safety.

Is There a Duty to Retreat in Your House?

Interestingly, the duty to retreat only applies in public settings. None of the states with a duty to retreat require that a person retreat in their own home, a term commonly referred to as "castle doctrine ." Four states (Connecticut, Delaware, Hawaii, and Nebraska ) take this a step further, saying that there is no duty to retreat when a person is at their place of work. Wisconsin also has this requirement, but only if you are the owner/operator of the business. Additionally, in Wisconsin, the duty to retreat doesn't apply if the person is in their car. 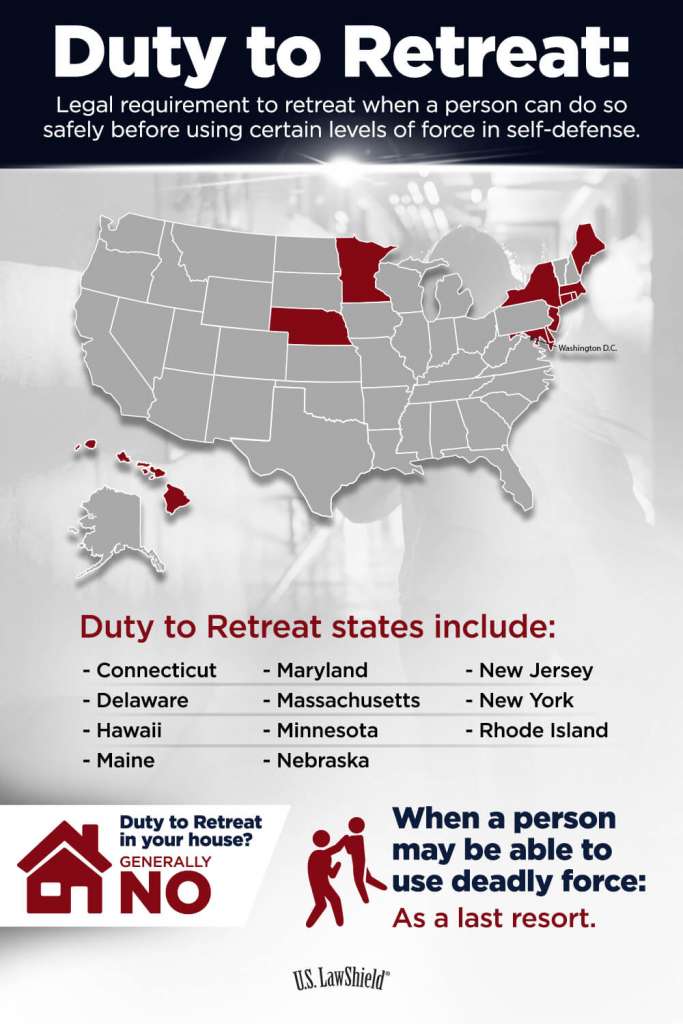 When Should You Retreat?

If you live in one of the duty to retreat states, and choose not to escape a dangerous situation, you may face criminal charges if you use force to defend yourself. In terms of practical self-defense, if a safe retreat is available, that's a wiser choice than getting into a violent confrontation, even if you live in a stand your ground state.

When Should You Use Deadly Force?

If you live in a state with a duty to retreat, you should only use deadly force to defend yourself or others if there is an imminent threat and there are no feasible options for escape or evasion. Usually, deadly force (sometimes called lethal force) should only be used as a last resort. The law varies greatly state-to-state. For example, in certain jurisdictions there may be no requirement to remove yourself from your own home to avoid a dangerous situation. For your specific jurisdiction, contact an attorney licensed to practice law in your state.

Could You Face Legal Consequences?

Always. Regardless of whether you live in a stand your ground state or a duty to retreat state, not all self-defense uses of force are “clean cut.” It's a good idea for you to educate yourself about self-defense laws and to seek legal advice before you start carrying a gun. That may help you avoid paying for a costly criminal defense during a trial after a self-defense incident.

If you do live in a state with duty to retreat laws, you need to know those laws and know what's required of you. Have a plan both for a self-defense incident and any legal issues that may follow. To find out more on how to plan for your legal defense, click here.