Home / Blog / Stand Your Ground: Legally Defending Yourself Outside the Home

Stand Your Ground: Legally Defending Yourself Outside the Home “Stand your ground,” one of the better known yet poorly understood self-defense policies, has received a lot of media and legal attention since its inception—most of which has been inaccurate or misconstrued.

In reality, stand your ground doesn’t do something as much as it removes the prerequisites that have understandably been called into question as unreasonable in real-life self-defense scenarios. Whether you’ve heard these laws referred to as shoot first, no duty to retreat, make my day, or stand your ground, join us on a deep dive into the background, meaning, and application of this much-maligned legal standard and how it has been notably used—or not used—as a legal defense in American self-defense cases.

What Is Stand Your Ground?

First and foremost, despite what you might have read or heard from reporting on well-known cases in Florida, Texas, and other states, “stand your ground” is simply the lack of a duty to retreat. In its simplest form, a state is considered a stand-your-ground state if, through legislative policy, judicial interpretation, or jury instruction, the state recognizes that people have a right to lethal self-defense outside the home without having to abide by an arbitrary requirement that they first attempt to run away when they could do so with absolute safety. Beyond that, it can get less clear-cut. Some states have a law that specifies there is no duty to retreat. Some states simply have no duty to retreat written into law (more common in western states), and others have a duty to retreat with provisions for certain locations where retreat is not required, such as cars, places of work, etc. 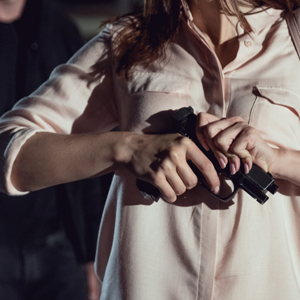 We cannot stress enough that seeking counsel from a self-defense lawyer (such as your local Independent Program Attorney) is important before considering how you might react in a self-defense encounter in public, as the consequences for getting it wrong are quite serious, and laws vary—even in some otherwise very pro-gun states.

Additionally, it’s worth noting that the stand-your-ground law Florida, or any other state has on the books, does not call out firearms or mention them in any way. The deadly force being authorized doesn’t require a firearm to be used in defense when someone chooses to stand their ground, though it is often the most effective method of doing so.

Where Does Stand Your Ground Apply?

While many people will search the internet for “stand-your-ground law Florida” and assume it’s a new law limited to states such as Florida and Texas, it turns out that the law is more common than not. Most people are familiar with stand your ground from the Trayvon Martin shooting by George Zimmerman in Florida.

Though the law was never cited by the defense, the judge instructed the jury (as is required by the law) that Mr. Zimmerman had a right to stand his ground and was not obliged to retreat. According to the main author of the Florida stand-your-ground law, State Rep. Dennis Baxley (R-Fla.)—as well as the former governor of Florida and other state lawmakers—it was not applicable to the Trayvon Martin case.

Stand your ground was not invoked by the Zimmerman defense, but it did become a major point of contention in the media. The law was blamed for the shooting and was described as a license to commit homicide, despite having minimal impact on the case or evidence supporting this claim.

The law does no such thing, and despite all the hyperbole surrounding the versions found in Texas and Florida, California also has what qualifies as a stand-your-ground law; there’s even what counts as a Wisconsin stand-your-ground law, though it limits where one has no duty to retreat to the home, vehicle, and place of business. Barring a handful of states with special conditions where there is no specified duty to retreat, in the majority of states, you can stand your ground.

Stand-your-ground laws generally apply any place within a state where a person is allowed to be under the law. There are some states that require a duty to retreat outside the home except for certain locations, most commonly inside your vehicle or at your place of work.

It would be wise to consult your state’s laws to determine where you can legally stand your ground within your state before making self-defense decisions. There can be big differences between Texas and Wisconsin law surrounding duty to retreat, for instance.

Where Does Stand Your Ground Come From?

The historical precedent for stand your ground goes back to the 19th century. Back then it was known as the “true man” or “true person” doctrine. The general meaning of the name is that a “true” man or person is not at fault and therefore does not need to retreat from unlawful lethal threats before meeting them with lethal force of their own.

Some people will try to frame stand-your-ground laws as dangerous new ideas that were introduced by Florida in the early 2000s but stand your ground has been the law of the land for most of the country for more than a century.

When Does Stand Your Ground Apply?

While for legal reasons the state you are in determines where you can stand your ground, timing is almost as important. Just as with any use of lethal force, you have to meet the legal criteria. While it can vary slightly state-to-state, this generally means you must reasonably be in fear of immediate death or great bodily harm; you must not have initiated the confrontation; you must legally be allowed to be where you are; and you must not be in the midst of committing a crime. 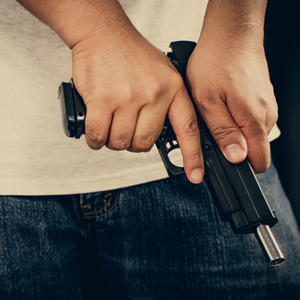 If you’re in a state that permits stand your ground, doing everything you’re supposed to and following the law, you are generally allowed to stand your ground without first having to attempt to run away.

How Do I Use Stand Your Ground?

You must ensure that you meet the criteria for stand your ground in your state, which in most states is fairly simple. Generally speaking, the following is commonly required for a stand-your-ground law to apply. First, you can’t be a criminal trespasser, you must legally be allowed to be where you are when the encounter begins. Second, you must not be in the process of committing a crime. Third, you must not have initiated the encounter. Controlling your temper in public, especially in traffic, is a key component of being a responsible gun owner and concealed carrier.

If you meet those three criteria and you are in a state without a legal duty to retreat, employing lethal force is likely an option—assuming you can also articulate that the standards for the use of lethal force have been met: primarily, that a reasonable person would also believe you are in immediate threat of death or great bodily harm.

What if I Live in a State Without Stand Your Ground?

If you don’t live in a stand-your-ground law state, you have the disadvantage of knowing that your actions will be analyzed after the fact to see if you could have found a way to retreat from a deadly force encounter with complete safety, before responding with deadly force of your own. You may need to plan for self-defense scenarios in which a possible escape route may be your first consideration, as you may only legally defend your life after exhausting all possibilities to escape safely from the general vicinity. This is unfortunate, given the high likelihood that an assailant will be using a firearm, retreating may not be especially effective at protecting you from such force. In the event a safe retreat is not possible, you are permitted to respond with force. Being able to articulate why you did what you did will be important, as will speaking to a lawyer as soon as possible following a use of force incident.

Even if you do live in a state with some form of a stand your ground law, these laws are not always the same, so be sure to check with a lawyer before assuming anything and take the time to learn the law in your state.

What Is the Purpose of Stand Your Ground?

Stand-your-ground laws exist to determine when, in certain situations, a person can use lethal force in self-defense. Generally, the self-defender must have a legal right to be where they are (not a criminal trespasser), they must not have initiated the confrontation, and they must have a reasonable fear of imminent death or permanent injury.

What Does Stand Your Ground Mean?

The existence of an unconditional stand-your-ground law in your state means you do not have a duty to retreat in a self-defense scenario, no matter where you are. Generally, if you are legally allowed to be somewhere, you are not committing any crimes, and you can reasonably articulate a need for the use of lethal force under the law, you are not required to attempt to run away before using said force.

There are a few states with conditional limitations on where and when you can stand your ground, and where and when you must attempt to retreat before using lethal force. Please check with an attorney before making decisions about self-defense in your home state.

Does Stand Your Ground Still Exist?

Stand-your-ground laws are found in a majority of states today. The laws and what they specifically cover vary by state, but most states have enacted some form of law allowing lethal force used in self-defense without a duty to retreat in public.

Who Started Stand Your Ground Laws?

Stand your ground laws existed in western states that joined the Union after the Civil War, by default; there was no existing law describing a duty to retreat at the time in those states (e.g., California Penal Code § 197, written in 1872), so they were in effect the first. Florida was the first state in the modern era to pass a law explicitly removing the duty to retreat, and many soon followed.