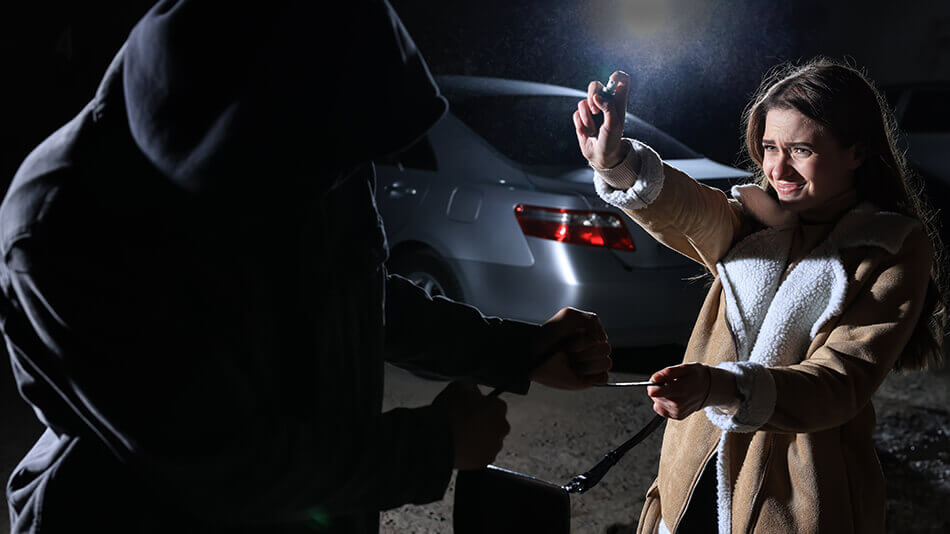 That’s why we’re going to take the time to address some of the most frequent internet searches regarding non-lethal self-defense options, try to answer some of the questions you may be asking, and explain why thinking of any of these tools as strictly non-lethal is probably a bad idea.

1. What Is the Most Devastating Non-Lethal Self-Defense Weapon?

Whether you define “devastating” as “causing great damage or harm” or “extremely effective or powerful,” the simple answer is that, in most cases, the weapons generally considered as non-lethal self-defense weapons simply aren’t devastating. That being said, what some people may intuitively assume is a “non-lethal” device does not mean that the tool cannot cause deadly force, and the laws of separate jurisdictions may treat the classification of these items very differently.

Complicating the matter further, there is no database of private citizen use-of-force incidents. This means that all the research into the efficacy of “non-lethal”—or as they are more properly referred to and categorized as, less-than-lethal—self-defense weapons comes from law enforcement incidents.

One study of two law enforcement agencies in Florida and their uses of less-than-lethal weapons found that conducted energy weapons, also known as tasers (not to be confused with stun guns), were 69.1% effective in ending an event in the first instance of use, while chemical agents such as oleoresin capsicum spray (“OC” or pepper spray) were effective in ending an event 64.4% of the time after first being employed.

Of the less-than-lethal options available to private citizens that were examined, the study found that tasers and pepper spray are the most effective at ending a confrontation after the first use, though both have their advantages and disadvantages.

2. Has Anyone Invented a Non-Lethal Gun?

Again, approaching this from a colloquial perspective rather than a legal one, there are various non-lethal“guns” on the market today that use a compressed gas propellant to fire projectiles designed to not cause permanent injury. The projectiles often, but not always, rely on either a chemical irritant that is dispersed upon impact with the target and/or the pain caused by the impact of the projectile to stop an attacker.

There are also several forms of pepper spray “guns” on the market today. These less-than-lethal defense tools utilize a compressed gas propellant to fire a condensed stream of oleoresin capsicum at an increased velocity when compared to traditional OC sprays.

Less-than-lethal munitions that can be fired from traditional firearms also exist. For private citizens these most often take the form of bean bag or rubber bullets fired from pump-action shotguns. For the private citizen looking for “non-lethal” alternatives, these are probably among the worst possible options, as these styles of projectiles rely on specifically targeting “non-lethal” areas of the body to reduce the risk of permanent injury to the target and have the ability to cause significant injury, even when utilized as intended. To make matters worse, depending on the law in the jurisdiction where the event occurs, these items may still be considered a use of deadly force (regardless of outcome).

Enjoying this content? Find out how you can get more like this sent straight to your inbox.

Non-Lethal vs. Less-Than-Lethal: Why Does It Matter?

While many people search for “non-lethal self-defense weapons,” there’s one thing that’s crucial to understand. The International Association of Chiefs of Police noted in their National Consensus Policy and Discussion Paper on Use of Force from July 2020 that

The difference between deadly and less-lethal force is not determined simply by the nature of the force technique or instrument that is employed by an officer. Many force options have the potential to result in the death or serious bodily injury of a subject under certain circumstances. For example, a police baton, if used properly in accordance with professionally accepted training guidelines, is not likely to cause death. But it can result in the death of subjects when used inappropriately by an officer who lacks training, or in situations where blows are accidentally struck to the head or other vulnerable area of the body. The same could be said for a variety of other equipment used by law enforcement officers. Therefore, a key to understanding what separates deadly force from less-lethal force has to do with the likelihood that a given use of force will result in death, whether it involves a handgun or other weapon or even an object that may be close at hand.

There are no truly non-lethal self-defense weapons. While certain defense devices may have a lower likelihood or capability to cause death or great bodily harm, none of them are without risk once used against another human being. Therefore, referring to these as non-lethal self-defense weapons ignores the reality that they are not always less than lethal. Something else that needs to be understood: the law may view the use of an item as lethal force no matter what the intent of the item’s design is.

Self-defense laws can be different between jurisdictions, and absolutely must be followed. This is why it is crucial that whatever personal safety tool you choose to carry, whether it’s a lethal option or a less-than-lethal weapon, you must always follow the law of a given jurisdiction. Even more important to understand is that force should always be an option of last resort, even if you have armed yourself with a less-than-lethaloption.

What Are the Best Less-Than-Lethal Weapons for Self-Defense?

The largest body of research regarding the efficacy of less-than-lethal defense tools comes from the law enforcement world. While there is a large market surrounding items such as tactical flashlights, tactical pens, or—as anyone who has ever attended a flea market or gun show can attest to—stun guns, most of these products are of questionable use, at best, when faced with a dedicated criminal attacker or used improperly, including in a way that constitutes deadly or lethal force. The stun gun, in particular, appears to enjoy a reputation for effectiveness that does not match the reality of many tests that, when used against resisting opponents, they’re often not very useful.

So, if we limit our options to those that are easily carried on-body, employed by police, and studied by researchers, impact weapons such as the collapsible baton, conducted energy weapons (tasers), and chemical agents (OC/pepper sprays) appear to be some of the most viable options for a private citizen—assuming all of those are even legal to own and carry in your jurisdiction, of course.

In the study we cited earlier, impact weapons showed only a 45.1% success rate in ending an event the first time they were used. They require the person using them be within contact distance to their attacker and also rely on the physical attributes of the person employing them. Additionally, impact weapons in the hands of untrained private citizens may not be considered as less-than-lethal force by the courts, since a blow to the head with a collapsible baton could be fatal with just one strike. Given their less than 50% success rate and the ease with which they can be used to apply lethal force, impact weapons/collapsible batons may be a poor choice for certain people with an interest in personal safety and less-than-lethal defense weapons.

Conducted energy weapons, more commonly referred to as tasers, can be highly effective (69.1% according to the previously cited study), when employed in the correct circumstances. They have a limited range—with models available to private citizens carrying two shots at most—and their effectiveness may be impacted by certain types of heavy or baggy clothing. Additionally, there appears to be growing concern that when used improperly, tasers can inflict lethal force against their target at a higher rate than other less-than-lethaloptions. While they may be a more effective option than collapsible batons or other alternatives, tasers should probably only be considered after carefully examining factors such as their cost, size, training requirements, and the concerns surrounding the effects of improper use.

Chemical agents, namely pepper spray (OC spray), appear to strike a balance between efficacy, size, cost, and reduced risk to the target. While there are some reports indicating that, in very rare cases, it is possible for pepper spray to be lethal, the vast majority of uses generally result in little to no permanent injury to the target. That is why a quality pepper spray from a reputable company may be a viable option for those interested in less-than-lethal personal defense; again, assuming they are legal in the applicable jurisdiction.

What Self-Defense Weapon Is Easy, Simple, and Effective?

Every self-defense weapon requires some level of training to effectively master. Speaking strictly of less-than-lethal self-defense options, pepper spray, for example, is relatively simple to use effectively while also posing a very low amount of risk of an unintentional application of lethal force.

Whenever you use force (whether “less than lethal” or otherwise) to defend yourself or others, there are risks involved: a risk that the force will be ineffective, and a risk that, despite your best intentions, you will run afoul of the legal system. That is why it’s crucial to educate yourself as much as possible regarding use of force and carry laws in your state. Contact your U.S. LawShield® Independent Program Attorney with any questions you may have about your state’s laws. Remember that, in addition to the tools you select to protect yourself from physical violence, the legal fight after the physical fight can be just as life-altering as any violent encounter. Selecting Legal Defense for Self Defense® coverage is one of the best choices a potential self-defender can make.