Home / Blog / Boating, Handguns, and Carry: How to Transport Firearms on a Boat

Boating, Handguns, and Carry: How to Transport Firearms on a Boat As with anything, legalities vary by location, meaning your firearms may or may not be allowed in the place you’re boating. That is, although firearms might be legal on open water in the county or state you’re in, the specific body of water you’re on might prohibit them. It’s your responsibility as a lawful firearms owner to know and follow the related firearms laws.

Is Transporting Firearms on a Boat Legal? Whether or not it’s legal depends on a variety of factors including the state you’re in, the type of body of water and, in some instances, whether or not you have a recognized concealed carry permit.

In Texas for example, boats are generally treated the same as any motor vehicle, meaning qualified persons can concealed carry a firearm on boats with or without a Texas License to Carry. Texas law also covers firearms on boatswhile transporting yourself and your firearms from your vehicle to your boat. That is, you can carry to and from your vehicle and boat as long as you take a direct route.

However, it’s vital to understand that there are certain Texas lakes and rivers that may prohibit firearms carry on the water altogether. Waterways controlled by the Army Corps of Engineers, for example, are governed by different laws, so be sure to check the specific authority that governs the body of water you’re visiting.

For bodies of water that cross state lines, such as Lake Texoma, a person must adhere to the firearms laws of both states (in this case, Texas and Oklahoma).

Can I Carry a Gun on a Boat?

In short, the answer to this depends on the specific laws, rules and regulations for the particular location or body of water you’re on. As always, it’s your responsibility as a gun owner to check the local laws. Remember, claiming ignorance of the law isn’t a valid legal defense.

If the laws and regulations regarding possessing or carrying a firearm on the body of water you’ll be boating on do allow firearms, you must then consider safety and methods. As with any time you carry a firearm, it’s wise to keep it holstered and in your immediate control rather than under a seat or beneath the steering wheel of a boat.

Is Gun Safety on Boats Different Than on Land?

Simply finding out if your firearm is allowed on the boat and open water in question isn’t enough. Safety with firearmsmust always be considered. The four rules of gun safety still apply—whether you’re on land or water:

Obviously, gun safety on boats is a bit more complex than on dry land. In many cases, you can’t see who or what’s below the surface, meaning you may have no idea what’s behind your target. For example, if the body of water you’re on is a popular swimming or diving spot, the odds are much higher there’s going to be a person out of sight and close-by. Adhere to the safety rules with the information you have available to you. And if you can’t see something, don’t pull the trigger. You’re responsible for every shot fired, so keep that in mind if you’re forced to defend yourself from a boat.

As for hunters who intend to hunt from a water vessel, the issue of safety on boats isn’t something hunter education programs typically touch on. Those programs typically focus on paying attention to the people you’re hunting with, which is certainly important, but there are a lot more variables to hunting from open water.

Hunting from boats is most likely to involve waterfowl, but there are some places where game (such as deer or alligators) can be hunted from open waters. In addition to a shotgun, a hunter might carry a rifle or handguns on their boat. Before hunting on open water, check the local laws to see what is and isn’t allowed. Some bodies of water totally prohibit any form of hunting.

In places where hunters might shoot game that’s located on a small island or elsewhere on a shoreline, while remaining in their boat, attention to safety takes on an entirely new level of importance. Hunters must be confident not only of their targets but what’s beyond them. Being familiar with the topography in the area you’re hunting is smart, as is having binoculars or a firearm with a scope powerful enough to see the area around a potential target.

Are the Rules for Boats and Guns on Open Waters Different Than those for Obstructed Water?

As you might have guessed, obstructed water is water that has boulders, vegetation, small islands or other things blocking it. If you’re boating, you’re most likely going to be on open water. (Taking a jon boat into a marshy area thick with vegetation is more of a gray area, but the same rules apply for carrying a gun on a boat.)

What Firearm Is Best on a Boat (When It’s Legally Allowed)?

Deciding which firearm best fits your boat needs depends on a variety of factors. If you’re carrying a firearm for self-defense purposes, a handgun will probably be your focus. Handguns are relatively easy to carry on a boat and tend to be simpler to use for defensive purposes than most rifles. However, if you’re participating in something such as duck hunting, you’ll want a shotgun.

As with any gun use, the firearm you select is a personal choice based on what you intend to use it for. Take the time to consider factors of the firearms in question such as legality, maneuverability, ease of use, water resistance and accuracy, among other things. If you’re hunting game animals or predators, on islands or shorelines from the boat, rifles capable of precisely handling the distance are a must. Whether you’re using a long gun or a pistol, put some thought into the selection of your firearm.

Are There Firearms Made for Boats? 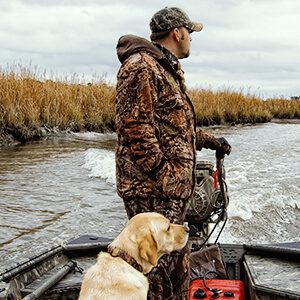 Yes. In fact, some firearms manufacturers specifically focus on firearms for open water and designing them to resist water-related damage. That means those firearms typically have marine coatings to make them more resistant to wear, tear, rust and other issues related to  water exposure. Of course, there are guns that have gone through cold water immersion and other tests to see how they run after being submerged, and those firearms have performed well. (Yes, there’s a purpose behind those seemingly ridiculous reviews that involve putting a firearm in the water or mud.) As always, do your research and decide which firearm best suits your needs.

What Ammo Is Best on a Boat?

The ammunition being used on your boat will depend on your purpose. If you’re hunting, you’ll want the correct ammo for the game you’re after. But if self-defense is your goal, consider defensive rounds such as hollow points. Modern ammunition is surprisingly resilient when wet; gone are the days when a little moisture ruined a round for use.

Are There Gun Cases Made for Use on Boats?

Yes. These gun cases have a wide range of features including being weather-resistant, water-resistant–or waterproof–and being made to float. (Floating cases are a favorite of many duck hunters.) Although you don’t have to have guncases meant for use on a boat, they can be useful if you’re not carrying a holstered firearm. Larger storage units for transporting firearms on a boat are also available and might be a good idea if you intend to regularly use your boat for something firearm-related such as hunting.

Should I Have Firearms on My Boat?

It might seem simple to assume you’ll be safe from credible, immediate threats on the open water, but this isn’t necessarily true. Recreational boaters should keep in mind that they could face other potential threats. As a matter of fact, every time a new hunting season rolls around, violent attacks take place over property line squabbles, trespassing, perceived poaching and other issues. And sometimes these happen on the water. Whether you have inflatable pontoon boats, a bass boat, a jon boat devoted to duck hunting or even a sailboat, there’s no way to predict if or when you could become the target of a violent attack.

Firearms on a Boat FAQ’s

How should firearms be transported in the boat?

If you’re hunting, transport them at the front of the boat with the muzzles of the guns aimed away from passengers. For self-defense purposes, it’s a good idea to wear the gun holstered at your waist just as you would if carrying on dry land.

What precautions should you take when hunting from a boat?

Wear a floatation device, stay near the shore when the hunting season allows, only shoot from stable positions, and only fire when the boat is not moving. Be sure to familiarize yourself with the laws regarding carrying firearms on boats.

When hunting from a boat, what is the best way to maintain stability?

Keep weight low and distribute gear evenly in the vessel to keep it as balanced as possible. Don’t go over the vessel’s manufacturer suggested weight capacity. Also, take care not to crowd too many people or excessive gear into one small hunting boat.