Home / Blog / A Mother’s Self-Defense Scare: Locked, But Not Loaded

A Mother’s Self-Defense Scare: Locked, But Not Loaded 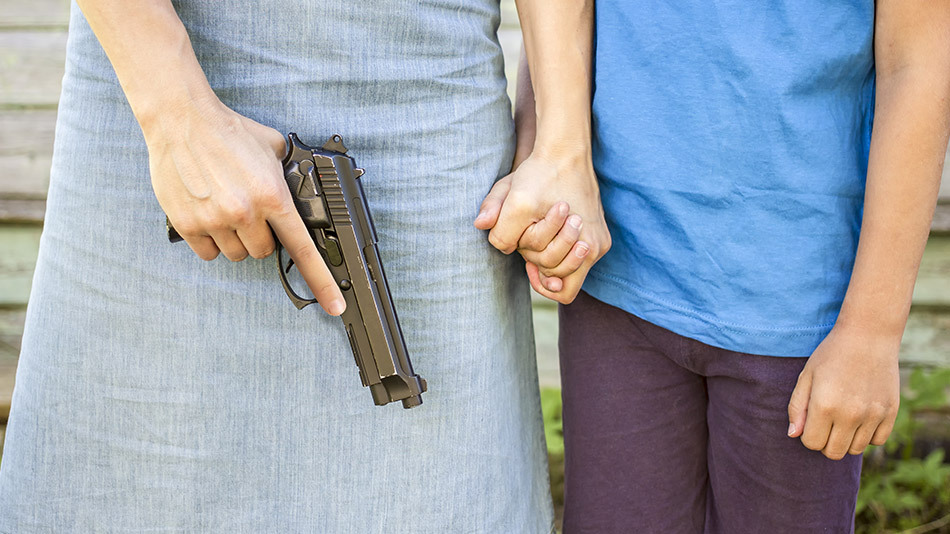 When we first got married, my husband and I had very different opinions on self-defense. My husband is a veteran who served two tours in Iraq and Afghanistan, where he used various weapons, including an M4, a .50 caliber machine gun, and a grenade launcher. He’s also an avid outdoorsman who has been hunting since he was a boy, so he has been around guns his whole life.

I guess opposites really do attract, because before I met my husband, I had never even picked up a gun. In California, where I grew up, the gun laws were much stricter, and gun ownership wasn’t as common. In fact, my mother believed that only criminals owned guns, so we never had any.

Admittedly, I used to be indifferent to the subject of gun control, but that changed dramatically after I became a mother. As a Florida resident, the news of the Parkland shooting hit too close to home for me. I knew that I didn’t want guns near my kids or in my house, especially after giving birth to our first daughter. But my husband had a different point of view; he went out to buy another gun, arguing that he needed to protect his family.

To have or not to have guns is one of those “deal–breaking” topics you should discuss with your partner before you get married.

Still, I knew what I had married into and was fully aware that guns were part of the package. As a way of compromising, my husband took extra precautions to make me feel safe with the guns securely stored in our home. We purchased a safe where he kept all of his guns except one to be used for home defense, which he kept by the bed. Even though it was out of sight, I still felt uneasy. The thought of having a loaded gun around my baby scared me. So, I asked him to keep the gun unloaded. He reluctantly agreed.

The thought of having a gun for self-defense seemed unnecessary in our middle-class, suburban neighborhood. Even in a panic, I seriously doubted my initial response would be to reach for a gun. I thought that was what 911 was for, right?

Early one morning, after my husband left for work, I heard the sound of someone kicking at my back door, then glass shattering. Instantly, my fight–or–flight instinct kicked in. Quick as a flash, I jumped to my feet and ran over to my husband’s nightstand, where I knew he kept the gun.

Unfortunately, I had no idea how to use one. I imagined it would be like in the movies, where you would just aim and pull the trigger. That was wishful thinking. I ran to the back door with the gun in hand and saw a man seconds away from getting through the door. He looked up and saw me running toward him, screaming at the top of my lungs, with the gun aimed in his direction. He paused for a second and then ran away.

It’s a good thing he ran away because if he had looked a little harder, he would have seen me trying to pull the trigger of a gun without a magazine in it. At my request, my husband kept the pistol unloaded, and I had never learned to load it! Once I was sure the coast was clear, I grabbed my baby, locked myself in the bathroom, and called 911.

A gun probably saved our lives that day, and it didn’t even have bullets in it.

After that, I knew without a doubt that I needed to learn how to use a gun properly. The entire experience taught me there’s a lot that goes into self-defense. There isn’t a day that goes by that I don’t think about how things could have turned out differently. There was so much more I needed to learn, but I knew that having a gun at home really can make the difference between life and death in a self-defense situation.

Looking back on my experience, I’m proud of myself for having the courage to stand my ground. It gives me peace of mind knowing that my husband and I have a self-defense plan going forward.

This story is a compilation of numerous stories we’ve heard from many of our members who have been in situations where they had to defend themselves. Having a self-defense plan is an active choice to be prepared for any eventuality that could put you, your family, or your property in peril. The mother in this story didn’t think that true danger could enter her home, but when faced with a threat, she realized the value of a gun in the home—and a plan. While an unloaded gun saved the day in this scenario, there are countless other stories out there that didn’t end so well. For all of these terrible events, and for all mothers who want to protect their families, all of us here at U.S. LawShield are proud to defend you.