Home / Blog / Can You Break the Law in Florida to Save a Life?!

Can You Break the Law in Florida to Save a Life?! 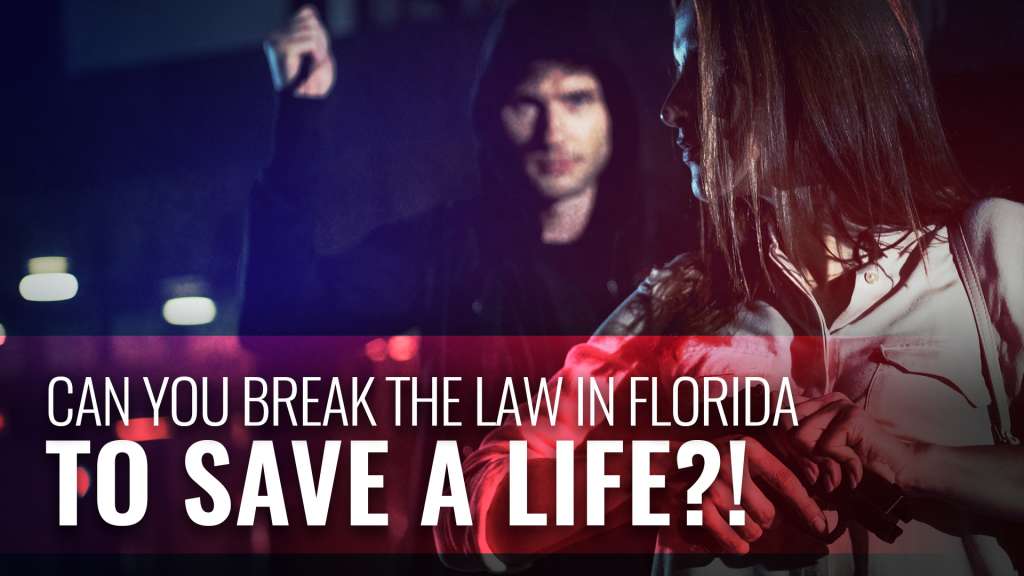 What do you do when you inadvertently carry your concealed firearm into a place you’re not supposed to, and you need to use your gun in self-defense?

Ladies, imagine you head to the bar to meet some friends. You are not drinking because you are the designated driver, but you meet your friends at the local watering hole for a night out. While you sit at the bar, you realize that you did not take your firearm out of your purse and are carrying it in a bar. You decide to finish your conversation and thentake the firearm to your car, but on your way to the door, you see a man break a bottle on the bar and threaten a woman with the broken glass. He approaches her, screaming that he is going to kill her. You yell for him to stop, as you open your purse. He turns on you, approaching you threateningly with the broken beer bottle, telling you that you should have minded your own business. What do you do?

Florida law allows you to use deadly force to protect against deadly force without attempting to retreat, in many circumstances. This is not one of them.

Unfortunately, because you are engaged in a criminal activity—carrying a concealed weapon into a bar—and are not in a place you have a right to be by virtue of having the firearm concealed with you, the stand your ground language of the statute would not apply to you. Before using deadly force, you would be required to attempt to flee if you could do so safely.

Now, let’s say you live next door to the local elementary school. One afternoon, on a day you have called in ill from work, you’re lying in bed and you hear shots fired from the direction of the school. You grab your firearm and go outside, where you see a masked gunman entering the school. Wanting to protect those inside, you follow the gunman into the school, shooting and killing him right before he opens fire on a classroom full of students.

We all know that you are not allowed to carry a firearm onto school property. Does the law offer you any protection from being convicted for carrying onto school property? For not attempting to retreat prior to opening fire on the gunman? The answer is yes.

Necessity is an affirmative defense, which means you may be prosecuted for the crime. However, you can raise the defense of necessity, and a jury can find you “not guilty,” because through the necessity defense, they can determine that your actions were justified.

For more information about where you can legally carry your firearm and what to do when you inadvertently carry a firearm into a gun-free zone, call U.S. LawShield and ask to speak to your Independent Program Attorney.