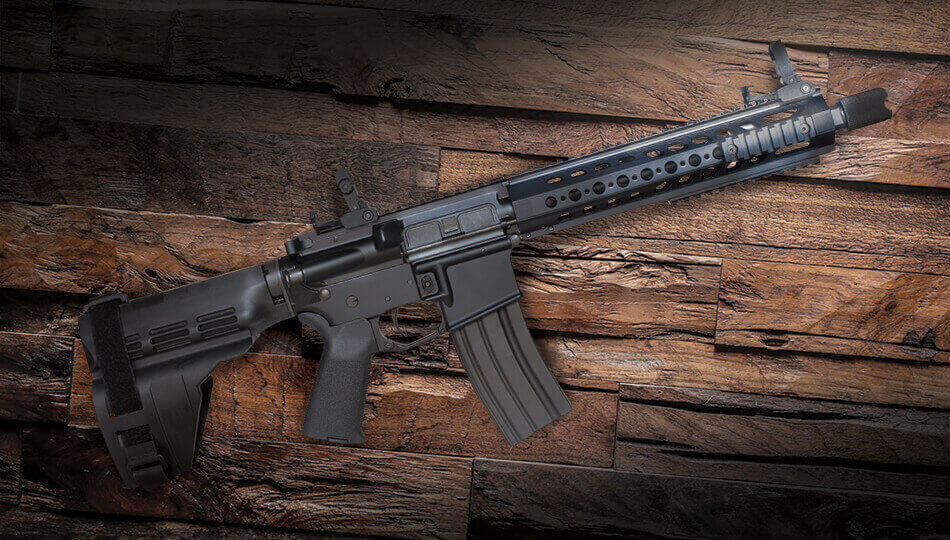 Since 2013, the Bureau of Alcohol, Tobacco, Firearms and Explosives (ATF) estimates that over 3 million stabilizing braces, or pistol braces, have been sold in the U.S. With over a dozen designs available on the market, they are mostly meant to be used with AR-15 style pistols. Pistol braces are devices meant to improve the shootability of large-format, intermediate caliber pistols, without shouldering a stock.

Putting a stock on a pistol, however, would require the possessor to have registered the item with the ATF in accordance with the National Firearms Act (NFA), since it would make the item a short-barreled rifle (SBR)—this also means paying a $200 tax stamp and going through an enhanced vetting process. See also 18 U.S.C. § 921(a)(8); 26 U.S.C. § 5821. These pistol braces have drawn much more attention from the public recently, as the President and the ATF have been eyeing them for increased regulation.

Whether you think pistol braces are a practical addition to an AR pistol, an attempt to skirt federal law, or a range-toy with drawbacks in real-world settings, it’s impossible to avoid the fact that they’re seemingly at center stage in the current gun rights debate.

Simply put, an AR-15 Pistol, commonly known as an AR Pistol, is an AR-15 platform firearm that has been modified to meet the legal definition of a pistol. Although there’s generally a buffer tube about 7.25-inches long projecting behind the action, as this is where the recoil spring is housed, it has no stock.

Prior to the introduction of pistol stabilizing braces, some people had put foam sleeves (or other coverings) on the end of their buffer tubes to facilitate shooting them more comfortably. However, it was debated as to whether or not this was legal to do.

Can I Make an AR Pistol into a Rifle, or Vice Versa?

This is one of the few simple questions surrounding this topic. A pistol can become a rifle, even a short-barreled one, but only once. A rifle can’t become a pistol, though it can become an SBR. To clarify, the path on this is a one-way street: if you want an AR pistol, you can’t use a lower receiver that has been configured for a rifle. This is an important distinction because if you put a pistol upper on a rifle lower without getting ATF approval and completing the necessary regulatory steps, you’ll most likely have manufactured or configured an unregistered SBR and committed a federal felony.

What is the Real Difference Between an SBR and a Braced Pistol?

In 2012, SB Tactical debuted the Pistol Stabilizing Brace, with multiple manufacturers first producing a model for either AK pistols or AR pistols in 2013. The AR model attached using the existing buffer tube, much like a regular stock, and the rear surface of it appeared large enough to provide a decent shouldering area, which was immediately noticed by consumers.

Eventually, in March of 2014, the ATF replied to an inquiry from law enforcement asking if it was legal to shoulder an AR pistol with a brace attached, or if it would reclassify that pistol as an SBR, and their reply was clear and straightforward.

This interpretation issued by the ATF helped provide clear and concise guidance to a subject involving pistol braces, one that had previously been dominated by vague suppositions.

Can You Legally Shoulder an AR-15 Pistol with a Stabilizing Brace on It?

At the time of this writing, it’s best practice not to shoulder this item. But know that the ATF has a long history of issuing conflicting interpretations on this issue.

Despite the 2014 determination, the ATF completely reversed course in January of 2015. In its “Open Letter on the Redesign of ‘Stabilizing Braces,’” the ATF asserted that the mere use of a pistol brace as a shoulder stock “constitute[d] a “redesign of the device” and did indeed change the classification of the pistol into an SBR. As such, anyone shouldering a braced pistol was “redesign[ing] a stabilizing brace for use as a shoulder stock” and the firearm was then subject to NFA requirements, including the completion of a Form 1 (ATF Form 5320.01) and paying the applicable $200 tax stamp.

Essentially, pursuant to the 2015 letter, anyone who shouldered an AR-15 pistol with a stabilizing brace attached had “redesigned” the device into an NFA item—a short-barreled rifle—and may be subject to charges.

The ATF then issued another letter 26 months later in March of 2017, changing course again. In this new letter, the agency clarified that “redesign” did not necessarily apply to a brace that was not “re-configured” but was still attached to a gun fired from the shoulder. The ATF noted that a pistol brace was not intended to be fired from the shoulder and ”reconfiguration” would occur when affirmative steps were taken to alter the stabilizing brace to make it more like a shoulder stock—such as by affixing it permanently to the buffer tube or removing the arm strap that allows it to be used around the forearm—before then firing it from the shoulder. Per the ATF, this reconfiguration would then fall under the NFA’s meaning of “redesign.” See 26 U.S.C. § 5845.

Why is This a Complicated Question?

Writing laws and drafting regulations that are intended to govern a subject as old and broad as “firearms” is difficult, while interpreting existing statutes and rules may be equally as challenging. Guns have been around in one form or another for hundreds of years, and there are countless ways firearms can be operated, modified, or accessorized. Attempting to manage every possibility is very complicated, especially as designers find new ways to innovate.

The concept of the pistol brace is a fantastic example of this in action. SBR’s have been regulated by the NFA since 1934, and over past decades, people have found ways to modify pistols without automatically creating an NFA item. Even the ATF seems to have conflicting conclusions surrounding the legality of some of these innovations, including that of pistol braces.

What is Being Done About It Right Now?

In April of 2021, the Biden administration directed the Department of Justice (DOJ)—of which the ATF is a part—to determine when a pistol brace “effectively turns a pistol into a short-barreled rifle” and should be regulated under the NFA. In June of 2021, the ATF responded with a proposed rule— Factoring Criteria for Firearms With Attached “Stabilizing Braces”—which included the creation of a worksheet and factoring criteria to determine whether a device would be classified as a “firearm” or a “short-barreled rifle” under the NFA and Gun Control Act (GCA). Through a proposed point system, the ATF would decide whether a pistol with a certain brace on it constituted an SBR and would thereby be subject to the applicable requirements of the NFA.

When examined by law-abiding gun owners, Second Amendment advocates, and some members of Congress, most found the proposal to be an executive overreach and its factoring criteria so vague as to allow nearly all pistols with stabilizing braces to be classified as SBRs, not to mention some of the concerns with the ATF’s rulemaking process. The backlash was immediate, intense, and entirely expected.

What Should We Expect in the Future?

Although the proposal is not currently law, this issue remains unresolved. At the time of this writing, it’s still looming—and it would be naïve to assume it will just be withdrawn and fade away. We should all be watchful for potential Congressional review and the issuance of a final rule. When such rule changes are proposed, one of the best things gun rights advocates can is to use the public comment period to make their voices heard, in a rational, respectful manner, and to encourage their friends and family to do the same.

The long, strange journey of the AR-15 pistol brace is an excellent example of the seemingly arbitrary nature of “gun reform” in America. However, it is also a lesson on how necessary and effective the vigilance and genuine concern for the rights and liberties of the average firearm owner can be, reaffirming that Second Amendment advocacy and the voices of lawful gun owners are an important part of preserving everyone’s rights!