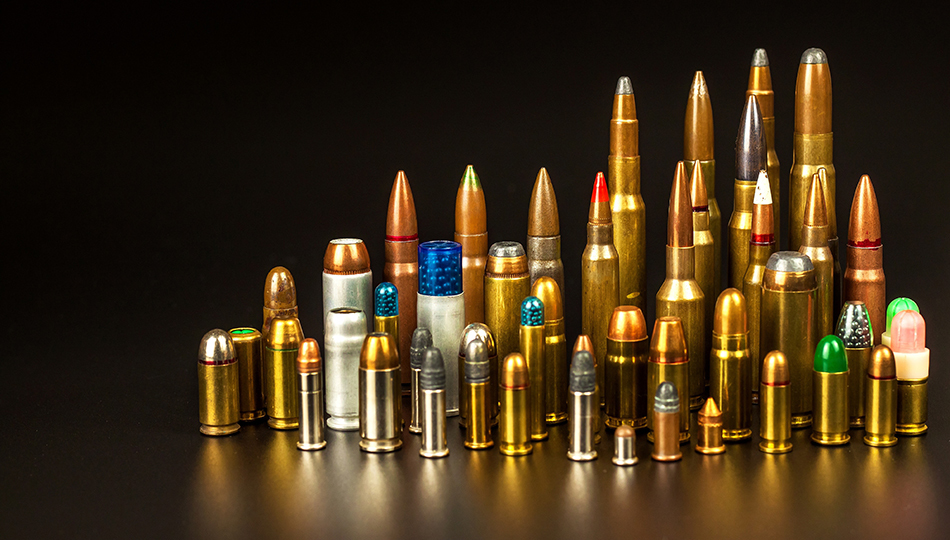 Sometimes the words thrown around in the gun world can be confusing. One example is the terminology used to talk about ammunition, because there are a variety of terms you should be familiar with. Here’s the thing: knowing these words and phrases helps you become a better shooter as such knowledge helps you understand what different components and types of ammunition do. Being familiar with them means you’ll be able to hold your own in a conversation about guns and ammunition—and be taken seriously—and that you’ll know just what you want when it’s time to get more ammunition to head to the range.

What Are the Basic Parts of Ammunition?

Rifles and handgun ammunition have general components that share the same name regardless of caliber or load. Those parts are the case, primer, powder, and bullet (also called the projectile). Bullets are the part most people are concerned with understanding, and for good reason. There are practically endless types of bullets on the market, each with a different use, so it helps to know what they do. We’ll get into that shortly.

Shotguns use shotshells. They’re significantly different in appearance than a round of ammunition for a rifle, but the names of the parts are almost exactly the same. The parts of a shotgun shotshell are the case, primer, powder, projectile (shot or slug), and wad.

What Are the Basic Words I Should Know?

Ammunition: A complete round or component of a complete round. A round is made of the case/cartridge, projectile, propellant, and primer and is ready to load into a firearm for shooting. Often referred to as “ammo.”

Ballistics: The study of projectiles–bullets–in flight and how it relates to performance and other characteristics. This includes the study of what happens inside a firearm when a bullet is fired. There are three types of ballistics studies: internal, external, and terminal.

Brass: Ammunition cartridge or case, whether it is made from brass or not. For example: “Police your brass” means to pick up your spent casings after shooting.

Bullet: The projectile component of a round of ammunition. The bullet is the component that exits the barrel when a gun is fired.

Caliber: In rifles and handguns, the caliber is the diameter of the bore of the barrel and also refers to the size of bullet the gun is chambered in. At its simplest, in ammunition, caliber refers to the width of the bullet; for example, 9x19mm is 9.01mm (0.355-inches) in diameter.

Cartridge: Often used to refer to a complete cartridge, or completely loaded round of ammunition, but also used as “spent cartridge” when referring to the empty brass left over after firing. Sometimes interchangeably used with “case.”

Case: The cylindrical tube that’s a component of a round of ammunition. The case is often, but not always, brass and is the component that contains the primer at its base, propellant in the tube, and the bullet at its mouth.

Centerfire: Cartridges with the primer located in the center of the base of the case; the firing pin strikes the primer at the center to fire the bullet through the barrel of the gun. Sometimes used to refer to guns that use centerfire ammunition, i.e., “centerfire rifle.”

Feet Per Second: How many feet a bullet travels per second. The bullet is moving at its fastest rate the moment it exits the barrel of the firearm and loses speed as it travels down range. Feet per second varies according to specific calibers and loads and is also affected by barrel length. Abbreviated as “ft/s” and “”

Foot Pounds: A measure of the kinetic energy produced by a bullet. Generally speaking, how much kinetic energy it takes to move something that weighs one pound a distance of one foot. The foot-pounds produced by a bullet drop drastically as it travels toward its target and not all of its energy is directly transferred into the target upon impact. Abbreviated as “ft-lb” and “ft-lbs.”

Gauge: Most shotguns are classified by gauge. In contrast, rifles and handguns are classified by caliber. The caliber definition refers to a measurement, while the original method of figuring gauge refers to weight. From a measuring standpoint, the gauge of a shotgun refers to the inside diameter of the barrel of the gun. As for weight, the gauge refers to the number of identically-sized balls cast from one pound of lead that will fit through the barrel at once. For example, a 12-gauge shotgun fits 12 lead balls of equal size, cast from one pound of lead.

Hull: The empty cartridge from a shotshell.

Powder: The powdered component of a round of ammunition that goes inside the case and produces pressure and gases that facilitate the bullet being pushed, or fired, from the case mouth. Also called “propellant.”

Primer: A small, circular cup filled with an explosive—usually lead styphnate—that sets off the powder in ammunition when it is struck by the firing pin of a gun. The primer sits in the primer pocket located at the base of a round of centerfire ammunition and is visible as a smooth circle. When it has been struck by a firing pin, the primer will have an indent at its center.

Rimfire: A type of ammunition with the primer located within the hollow rim at the base of the case. Unlike centerfire ammunition, the primer of a rimfire round is not readily visible and the firing pin must strike the outer edge, or rim, of the case to fire the round. One example of a rimfire caliber is the 22 LR.

Shotshell: The cylindrical cartridge used in shotguns. May refer to the loaded shotshell or an empty although it is more accurate to call an empty shotshell a “hull.” Sometimes referred to as a “shell.”

What Is Target Ammunition?

When someone talks about target ammunition, they mean something like full metal jacket (FMJ). FMJ has a bullet with a fully enclosed metal casing and is designed not to expand on impact. Target rounds simply punch a hole through paper or whatever object they are fired at and are not meant for self-defense or hunting use. They’re cheaper for manufacturers to, which makes them a smart, wallet-friendly choice for live fire practice with your favorite gun.

Different manufacturers do sometimes label their target rounds with varying names. For example, Federal Ammunition’s Syntech® TSJ (Total Synthetic Jacket) line is made for target practice and uses a polymer coating around the , which they claim helps extend the life of the barrel and reduce how dirty the gun gets during shooting.

What Is Defensive Ammunition?

Ammunition created to expand on impact that is made for self-defense purposes is known as defensive ammunition. One example is the hollow point (HP), a bullet with an opening, or cavity, in its nose. The opening helps it open, or mushroom, on impact with a target. An expanding round like that creates a larger wound cavity in its target while simultaneously slowing down so it is far less likely to over-penetrate and strike an unintended target by accident.

It does cost more to train with defensive rather than target rounds. For this reason, the bulk of training is done with target rounds. However, it is smart to spend some time practicing with the defensive ammunition you intend to use in your carry gun because that type of ammunition creates more felt recoil and muzzle rise. Using it at the range gets the shooter used to how it feels and performs.

What Is Hunting Ammunition?

There are a lot of similarities between defensive and hunting ammunition. Both are designed to expand and slow on impact, but hunting ammunition is made to function at its best on game animals. That is not to say defensive ammunition cannot be used by hunters, only that a bullet made for use on a deer gives its optimal performance on the deer. How is ammunition for deer different? One difference is that hunting rounds are not designed to take into consideration things like possible layers of clothing and barriers that might be found on or near a human assailant.

What Else Should I Know About Ammunition Terminology?

This can seem confusing, but once you get the hang of it, . When in doubt, ask an experienced gun owner for help. Taking the time to learn about not only your personal gun, but guns in general, makes you a safer shooter. It is always worth getting.