Home / Blog / What is the Purple Paint Law in Texas?

What is the Purple Paint Law in Texas? 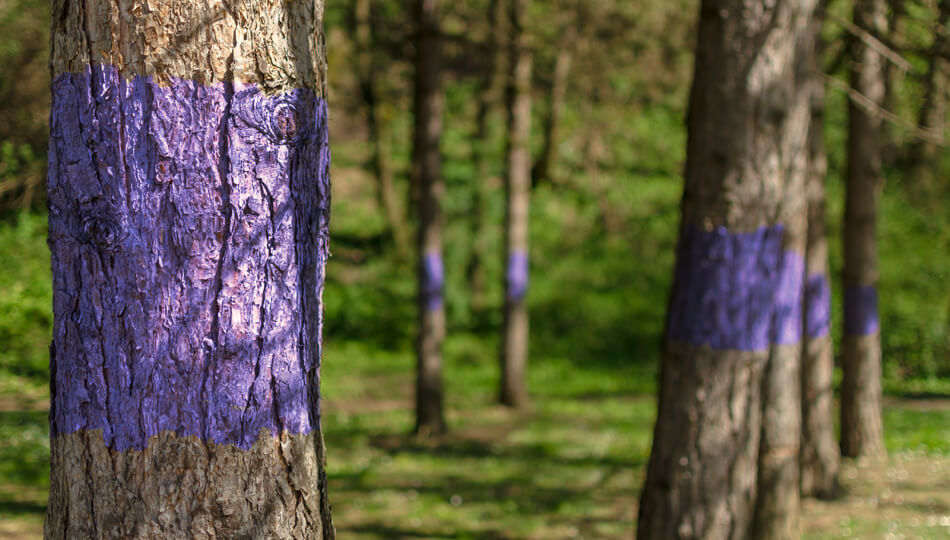 The Purple Paint Law in Texas

Imagine you’re hunting a South Texas ranch with your son, using all manner of calls to lure a gobbling Rio Grande tom into shooting range. You see his head bobbing in the lush green brush, and you catch glimpses of his long beard.

The tom is almost in range, just on the other side of a five-strand fence. No worries—you’ve repositioned, you’re well hidden, and if the bird takes a few more steps to the left you’re ready for a well-placed shot. But then your son whispers, “Daddy, why is that tree painted purple?”

The tree doesn’t signify the property of an alum from TCU or Tarleton State. In Texas, painted purple trees and fence posts are synonymous with “no trespassing.”

The “purple paint law” became official in Texas on September 1, 1997. But, as evidenced by your son’s puzzled reaction, the law doesn’t appear to be common knowledge for every hunter in the Lone Star State, even though Texas hunting regulations describe it.

“In this case, the color purple is not the title of a popular movie,” said Michele Byington, Texas Law Shield Independent Program Attorney. “It’s a warning that trespassers can be held criminally liable for entering the property without the express permission of the owner.

“While most everyone knows what a keep out sign is, purple marks are legally recognized alternatives or enhancements to such signs because of the signs’ vulnerability to time, severe weather, cattle scratching their itches, or vandals.”

The paint provision is part of Texas Penal Code §30.05, which says it’s illegal for anyone to enter property that is fenced, posted with at least one sign, or marked with purple paint on trees or posts. Trespass can be a Class B or C misdemeanor in Texas, punishable by up to a $2,000 fine or up to 180 days in jail.

“But,” Byington added, “if a hunter trespasses with a deadly weapon—which could be a rifle or shotgun—the offense can be a Class A misdemeanor. Consequently, the fine could be as much as $4,000 or an entire year in jail.”

Finally, if purple marks are used, they must be placed every 100 feet on forest land and every 1,000 feet on all other lands. Forest land is a property where trees are suitable for timber products.

The purple fence post law in Texas is enforceable by any licensed peace officer, such as sheriff’s deputies, police officers, and game wardens. The law exempts firefighters and medics responding to emergencies on the property.

“Purple rectangles may seem out of place on a remote Texas ranch, but they’re intended to serve a purpose,” Byington said. “We encourage everyone to know all pertinent laws while hunting or fishing, and to follow them.”

Hunting and fishing laws are complicated, and a mistake in the woods or on the water could cost you thousands. The stakes are high, and the consequences for landing on the wrong side of the law are not limited to hefty fines, but also include potential loss of property, jail time, and license revocation. Are you confident that you know the laws like the back of your hand?

Why leave it up to chance? Enjoy peace-of-mind at home and on the hunt. We know the laws, and we’re here to help!

Make the decision today to become a more educated and responsible gun owner by adding Hunter Shield to your Texas Law Shield membership.

Not a member of U.S. LawShield? Join our family today and add Hunter Shield!