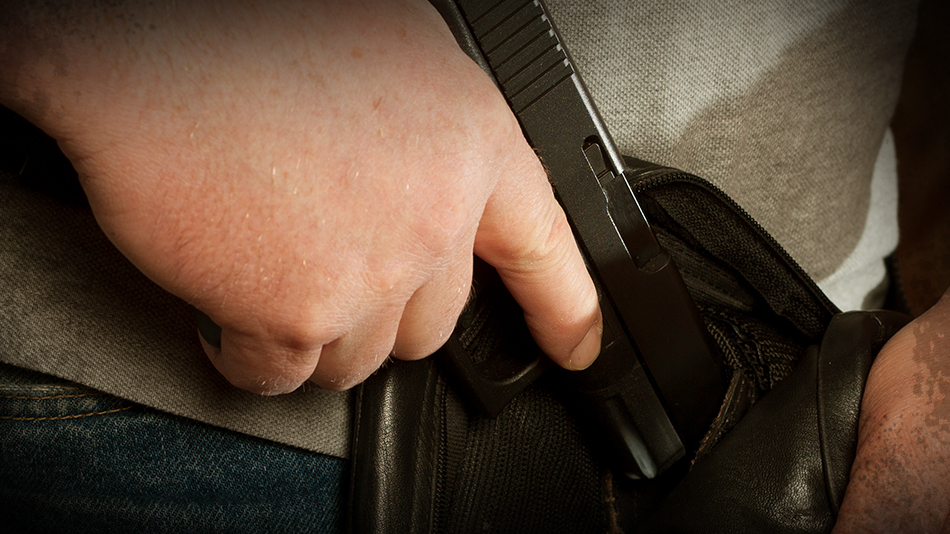 Gun owners sometimes carry in areas that might seem surprising to those outside the firearms world. In fact, before 2021 was even halfway over, there were 14 arrests reported at Disney World because guests had been carrying their guns even though it’s prohibited in the park. Why do people carry guns in areas they aren’t allowed? Reasons vary, but some of the ways people carry, and the locations where they are carried, are definitely unexpected. These are just a few of them.

But first, a disclaimer. Claiming ignorance of the law is not a legal defense. Knowing the laws and following them is part of being a law-abiding, responsible gun owner. We do not suggest or endorse carrying your gun in places where it’s prohibited; in fact, we’re telling you not to do it. Be smart. Be safe.

You might think we’re going to delve into guns found inside the human body, but we aren’t. Police find guns in all sorts of strange places outside the human body. For example, Police1 reported that a law enforcement officer found a gun stuffed in a diaper bag strapped across a woman’s shoulders. The woman in question was carrying her baby and walking into a courtroom, a commonly prohibited location, with the diaper bag—making it both foolish andillegal. It’s common for guns to be left unattended when being carried using other off-body methods such as purses, totes, fanny packs, and backpacks. If you’re going to carry off-body, it’s vital to follow safe carry practices and maintain control of the bag at all times.

Other places police officers have found firearms include under a wig on a person’s head; in a freezer, wrapped in foil and hidden under frozen fish; and among children’s toys, disguised as a NERF gun.

People carrying unholstered guns at the small of their back have dropped them at the grocery store, in line at the bank, at the gas station, and so on. The guns usually fall harmlessly to the floor, but sometimes they fire. Even guns that should be “drop safe” might fall in just the right way for a negligent discharge to happen.

A holstered gun can sometimes fall, too, because the holster may not be made for the gun or it’s just a poorly made holster. There’s nothing concealed or safe about a gun that randomly clatters to the ground.

Carrying your gun safely and according to local laws is your responsibility as a gun owner. It doesn’t matter if you carry openly or concealed; do it safely. That means you should have a good quality gun belt, a well-made holster, and an understanding of where and how to carry.

When choosing a holster, you want one with the following features:

Your holster is significantly less effective without a quality gun belt. A good gun belt should be thick and solid enough to hold up your holstered gun without bending, twisting, or sagging. That means the belts you buy at clothing stores generally won’t work; even belts advertised as “work belts” may not be sufficient. Without the right gun belt, you won’t be as safe or comfortable when you carry. This practice is advocated for and taught throughout the gun world, including by seasoned defensive handgun instructor Tom Walls, who states “use of a quality gun belt and proper, belt-mounted holster is the firearms industry standard and part of the required gear for all major firearms academies.”

The laws surrounding open or concealed carry vary by state, occasionally by city, and sometimes even by property ownership (i.e. federal premises). It’s your job as a law-abiding gun owner to know those laws for every location you intend to take your gun.

Some places that are generally illegal for carry in many states shouldn’t surprise you:

Places that are sometimes illegal for carry in many states may surprise you:

These aren’t complete lists, and the laws vary depending on where you live. Do your homework and get to know the gun laws where you live, work, and travel. If you’re planning a family vacation to Disney World, you should have already checked to see if they allow guns on their property (spoiler: they don’t). Claiming ignorance of the law not a valid legal defense, and neither is simply hoping you won’t get caught. Carry lawfully and safely, no matter how tempting it might be to throw your gun under your hat when you get on the roller coaster.