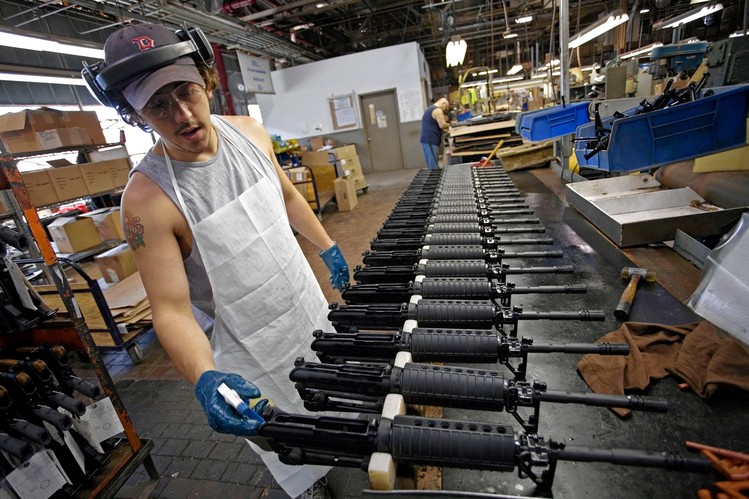 When you think of gun manufacturers, you think of Smith & Wesson, or Colt, or other large manufacturing companies headquartered in the Northeast. However, the Bureau of Alcohol, Tobacco, Firearms and Explosives’ (ATF) definition of a manufacturer includes small-sized businesses that have licenses to put the pieces of weaponry together and sell the finished product as a gun, or those that make components for gun manufacturers to use in their manufacturing process. When those businesses are counted, Texas leads the country with more than 1,100 licensed manufacturers.

Since 2009, the Bureau of Alcohol, Tobacco, Firearms and Explosives (ATF) has seen the number of licenses for gun makers nationally grow about 250 percent.

From 2011 through 2015, the number of firearms produced in the United States more than doubled while imports have declined, according to the ATF.

The ATF reported that from 2010-2014, handguns were the most manufactured firearm in the United States, while Austria was the No. 1 country of manufacture for firearms imported in 2015.

Florida now has more licensed gun manufacturers than any other state except Texas, with growth in the SunShine State expanding from 155 in 2009 to 691 by May of this year.

If someone with all the parts goes to a gunsmith and ask for it to be assembled, that is not considered manufacturing. But if someone puts it together himself and sells it as a gun, that is manufacturing.

With a manufacturing license, gun shop owners and firearms enthusiasts are able to obtain parts and assemble weapons as well as produce ammunition for sale.

The growing demand for the AR-15 rifle has led to many individuals to obtain a license just so they can manufacture and sell this popular firearm.

Some gun shop owners obtained a manufacturing license just to keep up with their competition, which is quickly becoming the standard of doing business in the gun industry. Others specialize in designing and building custom rifles or rebuilding older weapons, which requires machining or adding parts, all of which requires the manufacturing license.

This growth, fueled by an increase in demand for guns, has strained the resources of the ATF. In addition to their other duties of assisting local law enforcement in investigating gun violence, ATF special agents also monitor gun manufacturers. However, the agency has only been able to add about 180 additional agents, increase of about 30 percent.

According to one retired ATF special agent, the agency is concentrating its oversight efforts on the larger manufacturing facilities and distributors, and the smaller ones making just a handful of guns a year are largely left unchecked.

ATF spokesman Kevin Richardson said the agency has to prioritize. Among other things, it focuses on dealers who sell guns that end up at crime scenes.

The ATF believes it’s crucial for an agent to visit a store in that first year selling or manufacturing to give that dealer or that manufacturer a rundown on the system, answer any questions, and ensure that proper record keeping procedures are in place.

With the ease of manufacturing gun parts and their accessibility to those desiring to build and sell firearms, the old days of machining gun parts like a receiver or a trigger group in an industrial warehouse have given way to more portable technology that is easy to use.