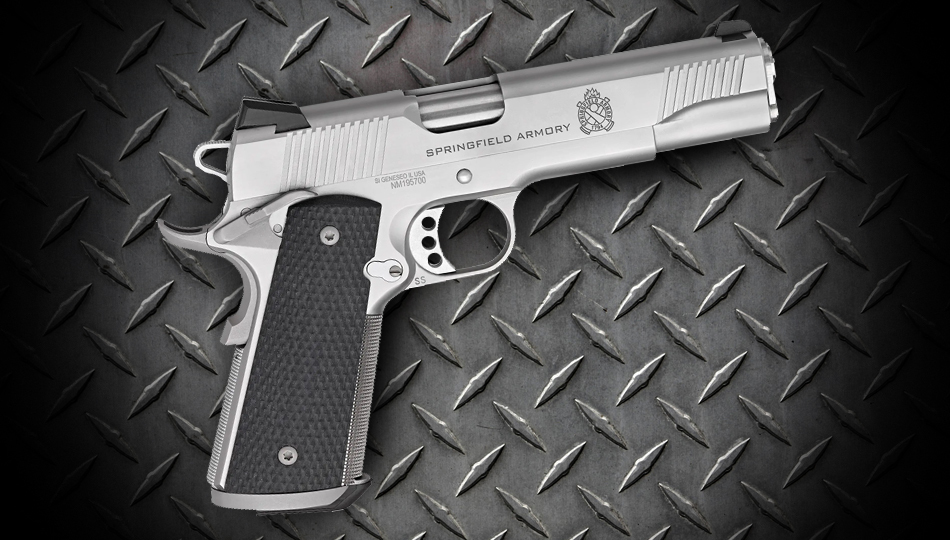 Some U.S. LawShield members may have seen the Springfield TRP pistol and wondered what’s it like at the range. Wonder no more: Here’s what happened when I put it through a rigorous shooting trial against three other top-end 1911s earlier this year.

Priced at $1342 from a major retailer, this springfield 45 pistol was originally offered as an affordable version of the Professional Model, which can run about $1000 more.

The Springfield Armory TRP pistol came with two magazines, a plastic range holster, and dual magazine carrier. The TRP does not incorporate a firing pin block into the action. The fit of the slide to the frame was tight, with very little lateral play. When racking the slide of the TRP, the fit felt tighter than a Colt Combat Elite or Colt Rail Gun I had on hand, and it was much tighter than a Springfield Loaded Model as well. But better fit wasn’t the only edge.

The Springfield 45 tactical pistol features a Teflon-based coating that proved durable during testing, and it was self lubricating. Still, I lubricated the pistol, as most users will.

The slide-lock safety was ambidextrous. Fit and crispness of the slide lock safety and magazine release were each excellent. The trigger action was clean and broke at 5.5 pounds.

The cocking serrations forward and rear are a bit longer than the Colts’. The Novak sights featured self-luminous tritium inserts, which are a pricey and helpful upgrade. The full-length guide rod offered reasonably rapid disassembly when used with an Allen wrench, compared to a two-piece guide rod that may be unscrewed by hand.

A big advantage was the TRP’s checkered front strap, which presented 20-lines-per-inch checkering that offered the shooter good grip when firing. The checkered G10 grips also added good gripping surface, but a female shooter said the checkering was too sharp for her palm. To control the pistol in stressful times, with sweaty or wet hands, these textures are helpful.

The TRP also featured a magazine chute that could speed reloads, but it wasn’t compatible with every type of bumper. I used the supplied magazines and five Brownell’s 7-round magazines. Some friends and I fired the Springfield on the same combat course, with the same ammunition, and fired each pistol at the same time with shooters alternating with each handgun and had several observations.

The TRP wasn’t the fastest getting on target, but once there, the Springfield TRP’s superior checkering made it more controllable than the Colts. During combat firing, the TRP showed an advantage in delivering rapid hits and controlled double taps.

Also, the Springfield TRP proved to be plenty accurate, with its best group being a 1.25-inch cluster of five shots with the Winchester 230-grain JHP, the hottest load tested with the most energy and recoil. On a bright day, the sun glinted on the night sights, which is worth noting.

The Verdict: The Springfield TRP is a great gun for the money. We encourage members to test-drive one at a Law Shield-affiliated range and see if it might work as your everyday carry handgun.

Bob Campbell is a former peace officer and published author with over 40 years combined shooting and police and security experience. He holds a degree in Criminal Justice. Bob is the author of several books, including The Handgun in Personal Defense, Holsters for Combat and Concealed Carry, The 1911 Automatic Pistol, The Gun Digest Book of Personal Protection and Home Defense, The Shooter’s Guide to the 1911, The Hunter and the Hunted, and The Complete Illustrated Manual of Handgun Skills. His latest book is Dealing with the Great Ammo Shortage. He is also a regular contributor to Gun Tests, American Gunsmith, Small Arms Review, Gun Digest, Concealed Carry Magazine, Knife World, Women and Guns, Handloader, and other publications. Bob is well-known for his extensive firearms testing. He currently lives in South Carolina.