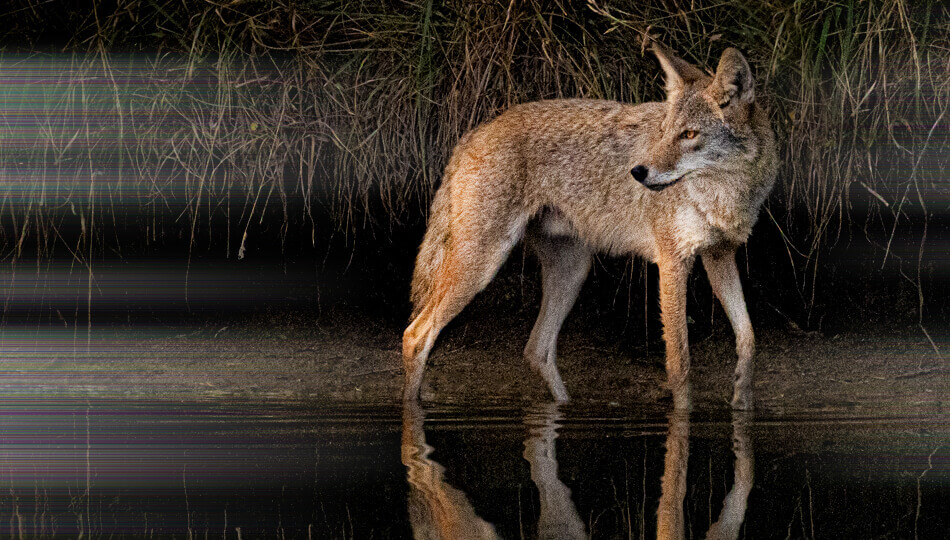 Any hunt where a coyote appears on the scene becomes Coyote Hunting in Georgia. That’s the mantra of hunters across the country, and for good reason. Coyotes may be small—around 20 to 50 pounds, depending on the region—but they are highly adaptable and opportunistic predators. Their jaws exert as much as 300 pounds of bite pressure, and although they frequently take down their prey alone, a team or pack can easily kill full-grown deer. In fact, studies show coyotes have a 50% to 85% predation rate on fawns, a truly devastating number. They do incredible damage to livestock, boldly snatch pets from the suburbs, and have even attacked and killed people. One such case took place in 1981, when a coyote entered the suburbs and dragged three-year-old Kelly Keen from the driveway of her California home. Although her father managed to rescue her, she succumbed to her injuries.

Yes, hunting coyotes is fun, but it’s more than that. It’s part of your responsibility as a hunter. Save a fawn, kill a coyote, right? However, coyotes are sharp. They’re cunning. In order to call coyotes effectively, you need the right gear. Take a look at our top five pieces of gear for honing your coyote-hunting skills.

A successful coyote hunt requires many skills but one of the most important is the ability to hold still. It’s easier to be still with a comfortable seat, and it’s a lot easier to see what’s coming if your seat is capable of moving. Enter the Alps Outdoorz Horizon Hunting Stool.

The Horizon has a 360-degree swivel seat—a seat that’s thickly padded, a rather important detail since coyote hunting involves quite a bit of sitting and waiting. At 21-inch tall this stool has enough height to boost you and your line of sight above overgrown grass and shrubs while keeping you somewhat low to the ground. The powder-coated steel frame is dark so it will not reflect sunlight and give you away, and it’s sturdy enough to give the stool a weight capacity of up to 300 pounds. If you, like many hunters, use binoculars, a thermal monocular, or other assorted smaller pieces of gear, there’s a place to set them in this stool: the Horizon has a storage bag underneath its circular seat.

The one caveat is the stool’s total weight of 10.5 pounds; although it isn’t incredibly heavy it is rather sizeable. There is good news, though, because the team at Alps Outdoorz planned for this by designing the stool to be packable. The Horizon quickly folds flat and can then be carried using the attached padded shoulder strap. If you want a solid hunting stool this type of a design is a good option due to its ability to rotate 360 degrees, the four-sided storage area, and its durability. You can find it on Alps Outdoorz’ website here.

If you intend to call coyotes, not just hope one wanders into range, you should consider a good e-caller. ICOtec is a slightly more recent arrival on the e-calling scene but they’ve proven their effectiveness time and time again. Their top-of-the-line model is the GC500, a portable, programmable predator caller with a variety of features designed to help you bring in coyotes from a distance.

The GC500 is small compared to many other e-callers—8-inchx4-inchx6-inch—and lightweight at two pounds. The unit has a flat dark earth type of finish which has blended well in terrain from the deserts of Nevada to the greenery of Wisconsin. It comes with a handheld remote that’s small enough to slip in your pocket and has raised buttons that can be operated with or without gloves. If you’re hunting at night, the remote can be backlit, a feature that’s come in handy on numerous occasions, and the antenna can be raised or collapsed as needed. As for the antenna, it’s actually one of this e-caller’s greatest features. The GC500 is listed as having a remote range of up to 300 yards but I’ve had success using the remote beyond 300 yards. Even better, it’s not a line-of-sight remote, meaning there won’t be any frantic waving or contorting so you won’t be forced to blow your cover attempting to operate the e-caller.

This model holds up to 200 calls—a number far beyond what most coyote hunters will ever use—and runs on four AA batteries. Six calls can be saved as favorites and you can name your calls whatever you wish when you program it. It’s .mp3 and .wav compatible. And if you want to use it in sync with decoys, you can, because there’s a jack on the GC500 where their AD400 Attachable Predator Decoy can be attached. The AD400 has an impressively quiet motor and a variety of speeds—and you can control those speeds with your remote. Once you’ve seen a coyote come in hard charging at that decoy, you’ll see the value of a moving, flickering object for bringing them in.

The GC500 has good sound, solid range, and portability on its side. It’s also kept running for me in sub-zero temperatures, and that’s not something every e-caller can claim. Check it out here.

Yes, you can call coyotes wearing jeans and a tee shirt. I’ve done it, as have countless others. That said, it is true you will increase your chances of success by wearing camouflage, and not just any camouflage. Select the pattern of your camo based on the area you’re hunting so you blend in to your greatest ability. Select the brand of your camo based on its quality, comfort, and usability. That’s where Nomad comes in.

Nomad Outdoor offers a line of camo designed by guys who hunt hard and know their stuff (having seen them at it, I feel comfortable vouching for their high experience level). A favorite of mine is the Nomad Syncrate Hoodie, a midweight half-zip fleece that’s perfect for lessening the power of cutting winds. The hood can act as an additional buffer from the elements or added concealment and the wicking material provides extra comfort. It has a variety of features from pit zips to a safety harness port to a pair of zippable slash pockets. But the real reason Nomad’s jackets are a staple in my admittedly vast camo collection is that the sleeves have extended, angled cuffs to cover the backs of your hands. Even when you’re on your gun, the backs of your hands remain covered.

The team of seasoned hunters at Nomad has designed an ever-expanding line of camo for all seasons in a variety of patterns. It’s tough, well-made, and even covers the cool factor (if you care about that). Check it out here.

Whether you prefer diaphragm calls over e-callers or simply enjoy having more than one option for calling coyotes, MFK Game Calls have you covered. If you don’t make diaphragm calls a regular part of your coyote-calling repertoire, it’s time to start. It’s a tried-and-true method for creating surprisingly realistic sounds in real time.

The guys at MFK include call maker and founder Torry Cook and pro-staffer Jason Groseclose, a pair with a long list of calling championships under their belts. They agree the MFK Pretty Deadly is a good option for new callers while remaining a great all-around choice as well. The Pretty Deadly is a single-reed caller that produces barks, whimpers, and howls. Because it’s lighter, air and tongue pressure are easier to control. Torry’s favorite is the MFK Competition Howler which is heavier and able to handle greater pressure.

Mastering mouth calls is a good idea for all coyote hunter and diaphragm calls are ideal because they’re highly portable even in larger numbers and because they allow the hunter to carefully control vocalizations. With a Pretty Deadly you can emit a quick bark to encourage a coyote to pause or howl to bring them in at which point you can make the caller’s name come true. Check out MFK here.

As Hornady puts it, speed kills. And when your ammo is fast—and precise—you’re more likely to drop that coyote as it sprints across your field of vision. Hornady’s Superformance V-MAX line was designed with varmint hunters in mind and comes in some of the most popular coyote-hunting calibers on the market: .223 Rem 53 grain, .222 Rem 50 grain, .22-250 50 grain, and .243 Win 58 grain. If your caliber of choice isn’t included the almost 70-year-old company manufactures other hunting rounds more than capable of getting the job done.

These rounds feature polymer-tipped bullets designed for match accuracy and swift fragmentation for a clean kill. You provide the shot placement; Hornady Superformance V-MAX does the rest. Check it out here.

This is just a starting point. In addition to this gear you’d be wise to invest in thermal or night vision from a reputable company such as TNVC or FLIR, a face mask or face paint, and other items. Concealment through well-made gear and holding still is your goal. Then you need a quality rifle—check out the Remington 700—and calling equipment. Sure, you could wander into a clearing in jeans and a tee shirt toting your rifle and hope for the best, but wouldn’t you rather increase your chances? May the coyote-hunting odds be ever in your favor.

Make sure you know the hunting regulations in your state. U.S. Law Shield is here to help. Members of U.S. Law Shield’s Hunter Shield program have access to attorneys to get the answers as needed not only about coyote hunting but hunting and fishing in general. Members are also granted discounted entry into U.S. Law Shield Sportsman Law Seminars. Seminars include access to former game wardens and attorneys who are also seasoned hunters, among other things. Join today and broaden your hunting education as a sportsman and ensure your hunting and fishing questions are answered by trustworthy sources who are familiar with the law.

Independent Program Attorney Mike Hawkins of the Hawkins Spizman Kilgo law firm in Atlanta pointed out that the coyote is a non-native predator that can be found in every county in Georgia and has the unique ability to live in a variety of habitats. Trapping and/or hunting are legal and recommended methods for managing coyotes. Because they did not historically live in Georgia, there is no closed season for their harvest. Coyotes may be hunted in Georgia year-round, he said.

In fact, to encourage the taking of coyotes from March to August, 2017, the Georgia Department of Natural Resources’ Wildlife Resources Division has introduced the “Georgia Coyote Challenge.” Each coyote killed, up to five a month per hunter/trapper, will earn an entry into a monthly drawing for a lifetime license (or equal credit for purchase of hunting/fishing licenses). U.S. Law Shield Members who want more information on the Georgia Coyote Challenge can learn more by visiting the Georgia DNR website.

Hawkings said current scientific research suggests that removal of coyotes during the spring and summer is the most advantageous time to reduce the impact of predation on native wildlife. The Georgia DNR wants to encourage coyote removal efforts during this critical period.

Do you need a license to hunt coyotes in Georgia? Hawkins said, “A resident hunting or combination license is required for all resident hunters 16 years of age or older, except when hunting or fishing on one’s own land or land owned by immediate family (blood or dependent relationship) residing in the same household. Remember that Georgia law as it relates to hunting applies to coyotes as well—for example, it is unlawful to bait coyotes, and it is unlawful to hunt coyotes from a vehicle.” —by Kat Ainsworth, Contributor U.S. Law Shield Blog