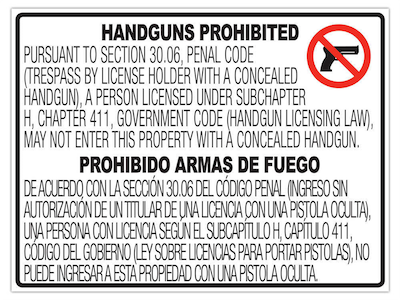 Recently we asked about the different penalty levels of 30.06/30.07 signs; or how different locations can change the severity of a sign violation. It is a common saying amongst gun owners that we would rather be judged by twelve than carried by six; in other words, sometimes it’s better to duke it out in court than to die at the hands of an attacker. As lawyers, however, we’ve seen plenty of clients go through the excruciating process that is our legal system, and while they’re waiting for that verdict to come back from the twelve, they tell us they’d rather risk being carried by six next time!

It is an age old adage that a lawyer’s job isn’t to tell you how to live your life, but instead to tell you the consequences of how you live your life. Accordingly, we’ve created a quick list so you can know what you’re getting in to if you accidentally (or, depending on who you are, purposefully) carry past a 30.06/30.07 sign.

As you can see, the 30.06 and 30.07 signage statutes are filled to the brim with requirements, but there is virtually no case law to give us any kind of guidance as to how it plays out in the courtroom if one of these requirements are not met. So, let’s say you decide to risk it on one of the above gray areas, and carry past a sign you think should be invalid. What exactly are you risking from a criminal penalty standpoint?

Unless it is a location specified below, a 30.06 or 30.07 sign violation is a Class C misdemeanor, punishable by a $200 fine only! What’s more, this penalty never enhances no matter how many times you violate the statute, nor does it impact your license to carry. We’re not telling you to go ahead and violate these signs as long as you are willing to risk $200 each time you’re caught!

As of August 1st, 2016, it became legal to carry concealed into a campus building or other campus property by License to Carry holders (remember though, this only applies to four year universities; campus carry for two year or junior colleges doesn’t start until August 1st, 2017!). However, campuses are allowed to post 30.06 signage to prohibit carry into buildings, or portions of buildings. Earlier we learned that 30.06 violations were mere $200 traffic tickets; so that means we can blaze past these 30.06 signs posted on campus, right?

Wrong! For signage posted on campus property, if you violate such a sign, it becomes a Class A misdemeanor. In Texas, Class A misdemeanors are punishable by up to a $4000 fine, up to a year in county jail, AND you lose your license to carry for five years (you even lose your license if you cut a deal with a deferred adjudication!). To make matters worse, if you openly carry on college campus property past a measly 30.07 sign, you could be charged with a third-degree felony! Third-degree felonies are punishable by 2-10 years in jail, and/or a $10,000 fine. Additionally, if convicted, you lose the right to purchase a firearm forever, much less carry one!

It is a little known fact that license to carry holders are allowed to carry into a hospital, nursing home, amusement park, place of worship, or meeting of a governmental entity, unless there is a posted 30.06 sign. So, if you go to your church and don’t see a sign, you are legal to carry inside; however, what about if you do see a sign? Is it that low-risk $200 fine?

No! For these locations, the legislature left the penalty at a Class A misdemeanor; punishable by up to a $4000 fine, up to a year in county jail, AND you lose your license to carry for five years. So even if you disagree with the mentality behind the posted 30.06 sign on the hospital, take it back out to your car or risk the Class A!

As you can see, the location is just as important as the sign itself. Keep in mind, that this is just a small slice of what a LTC holder has to worry about; 51% signs and just being asked to leave are other ways you can be kept from lawfully carrying in an establishment, which is to say nothing of the myriad places that don’t require any notice whatsoever. If you’re ever in doubt, take your gun back out to your car or give us a call!