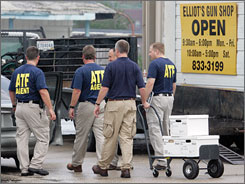 We’ve seen the news reports about how most of the guns recovered from crimes in the U.S. can be traced back to a small percentage of gun dealers. An ATF study revealed that 57 percent of crime guns were traced back to just 1.2 percent of the FFLs.

One such bad apple was Badger Guns, the Wisconsin gun retailer hit last year with a judgment of nearly $6 million awarded to two Milwaukee police officers shot with weapons purchased at the store by straw purchasers. Badger Guns amassed 130 federal violations in the two years leading up to the shooting.

The Bureau of Alcohol, Tobacco, Firearms and Explosives (ATF) is responsible for licensing persons engaged in manufacturing, importing, and dealing in firearms. ATF also is charged with ensuring that those who are licensed (like Badger Guns) do so in compliance with the Gun Control Act (GCA) of 1968, and its implementing regulations.

This is accomplished by ATF agents, Industry Operations Investigators (IOIs), conducting an on-site inspection of dealers, but not more than once a year without a warrant.

The problem is that there are far more FFLs than agents that can inspect on a regular basis. At the end of 2015, there were 139,840 FFLs, about 65,000 of which are dealers. The ATF’s budget allows for just 620 inspectors.

Last year, the ATF conducted 8,698 inspections, less than 7 percent of all licensees nationwide.

On October 28, 2015, Rep. Gwen Moore (D-WI) introduced the Gun Dealer Accountability Act, H.R. 3853,which seeks to give the Bureau of Alcohol, Tobacco, Firearms and Explosives (ATF) more authority to inspect dealers with a history of selling weapons eventually used in crimes.

As proposed, Rep. Moore asserts it is narrow because it only targets two specific classes of firearm dealers: “Those that have already been found by a court to have knowingly or negligently participated in an illegal gun sale, and those that have sold more than 10 crime guns in two years.” It would allow the ATF to put those dealers on probation and require them to temporarily conduct physical inventory of their firearms and submit it to authorities. This is necessary, states Rep. Moore. because the Tiahrt Amendment of 2003 to a Justice Department appropriations bill prohibits ATF from requiring gun dealers to submit their inventory lists to law enforcement, which Rep. Moore believes hampers the tracing of guns recovered from crimes.

So, what happens in an inspection?

According to the ATF, “the purpose of the inspection program is to educate the licensee about regulatory responsibilities, and to evaluate the level of compliance.”

The IOIs review records, inventory, and the licensee’s “conduct of business,” looking for compliance failures, which constitute violations of law and regulation, including failure to verify purchaser eligibility; inability to account for firearms received and disposed; failure to ensure firearms traceability due to improper recordation of firearms receipt and disposition; failure to properly document firearms transfers; and failure to report multiple sales of handguns.

During compliance inspections conducted in fiscal year 2011, ATF investigators identified nearly 177,500 unaccounted for firearms, which FFLs could not locate in inventory or account for by sale or other disposition.

Agents also provide instructional and educational materials about the requirements of the law and regulations and best business practices.

If cited for multiple violations, most likely the inspection will end with a Report of Violations and possibly a Warning Letter or Warning Conference.

As part of the closing conference and toward the end of an inspection, the dealer is likely told how to correct their mistakes. They may be issued a “warning” concerning repeat violations in the future. With all of this ATF instruction comes a follow-up inspection to gauge progress towards compliance. These “Recall” inspections carefully compare the last inspection to the current inspection to document signs of improvement (or lack of).

Firearms dealers are entitled to an informal hearing to contest alleged Gun Control Act violations. The hearing officer will make recommendations to be reviewed by senior ATF officials, and if a dealer is found to be in violation and has their license revoked, they can appeal the decision in federal court — and continue to sell guns while the appeal is pending, which could take years.

Tell us whether you believe more investigators and more frequent inspections are needed or not.